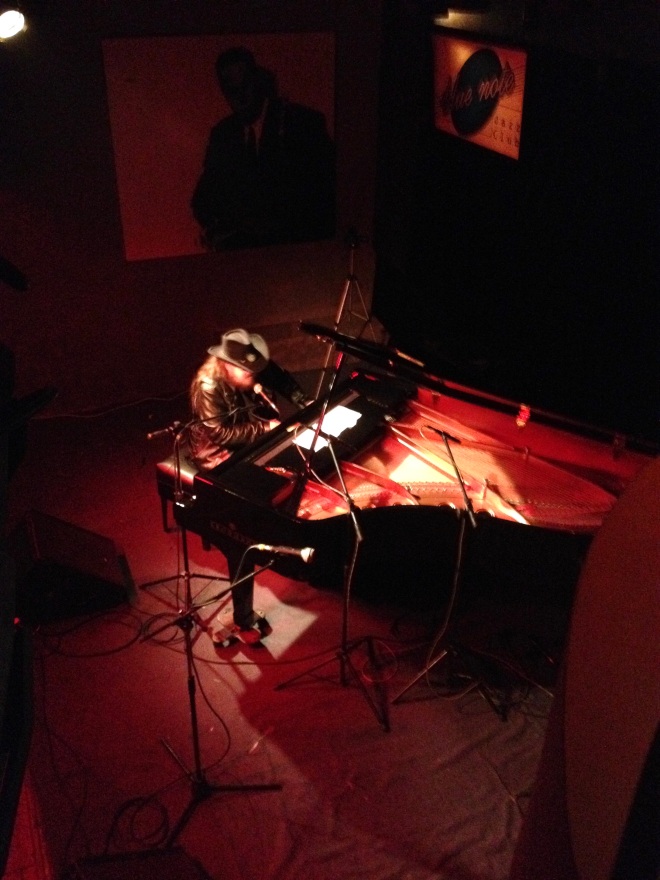 (The photo that Polly took that night during my introductory solo song at The Blue Note.)

It was Tuesday, September 18, 2012. Polly and I were performing the last concert on our Acoustic Tour 2012 – six venues, six cities – in Poland. 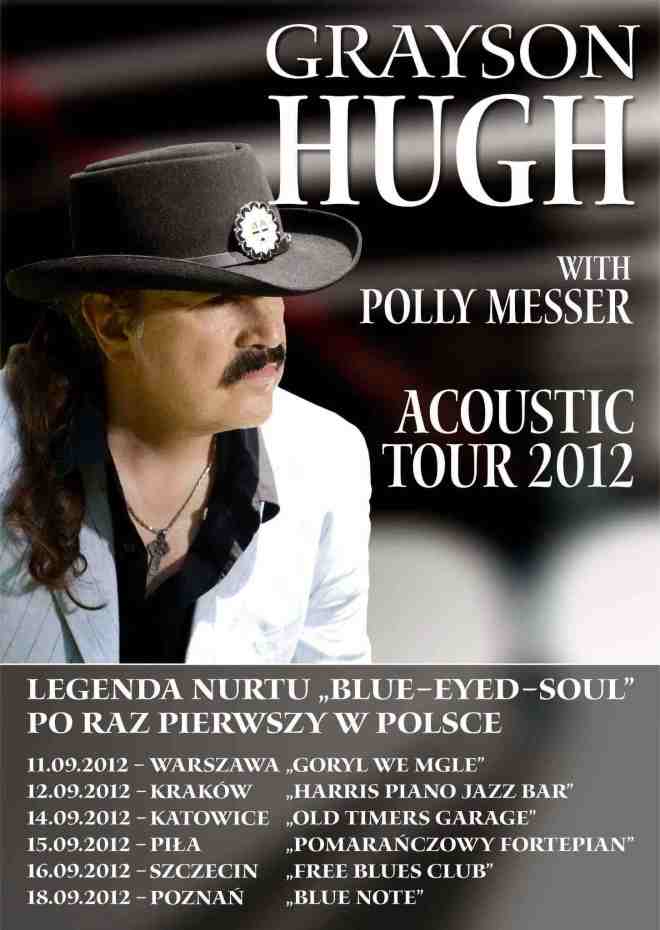 One of the songs I performed was “Look Homeward Blues”. It was the one song I performed without Polly. It was a five to six minute piece that was simple in its classic blues structure, but less conventional in its improvised sections between the verses. The idea was to build this song up from a quiet, steady, almost folk guitar-picking style to a roaring climax that pulled out all stops, referencing high energy gospel playing, African and Latin rhythms, Stravinsky-like orchestral figures, free jazz and classic soul.

So as I was “Travis picking” away on the piano keys, and singing about leaving and looking back to your childhood home, she exited the stage and ran up the stairs to the balcony and snapped, among others, the photo you see at the top of this page. 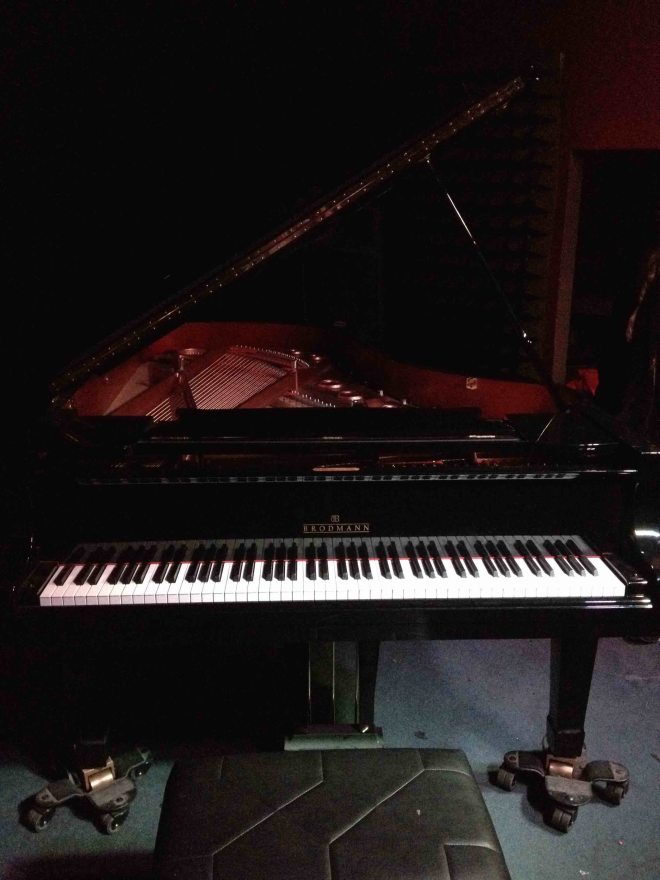 (The Brodmann Grand at The Blue Note in Poznań.)

It was a good night. The concert grand there (a Brodmann) was a truly amazing instrument. Playing it felt like butter, but with tremendous body.

During this whirlwind tour, we barely had time to catch our breath. In the first half of the tour, we had the luxury of being driven by our host/promoter’s cousin, who was in fact a professional driver. When Spielberg was making “Schindler’s List” it was Stasio (or Stan, as he preferred) that drove him around. Stan was a wealth of information and I learned alot about Polish history from him as we drove through the countryside. He was fond of saying” the history of Poland is sad and complicated”.

We thought we were prepared, traveling as light as we could (thanks to my über organizer wife) but of course it was inevitable that we forgot a thing or two. One of those things was a stand for our video camera. We finally tracked one down at a galleria (mall) in Kraków. But the stage at The Blue Note is quite small. The only place I could place the camera to get a halfway decent shot was directly behind me. So I was able to get a couple videos, primitive as they are with only one camera.

To watch the video of us performing my song “Somethin’ Curious Goin’ On” from that show, click HERE. 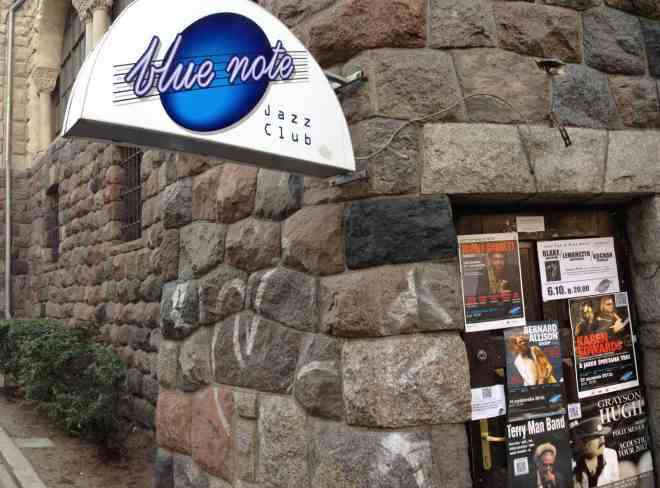 (The front door at the Blue Note in Poznań, with my poster.) 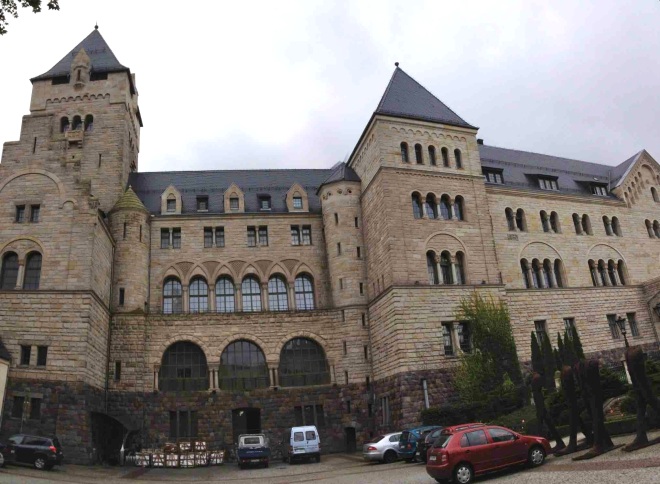 (The Blue Note is located in the ground floor of Poznań Castle, pictured here.) 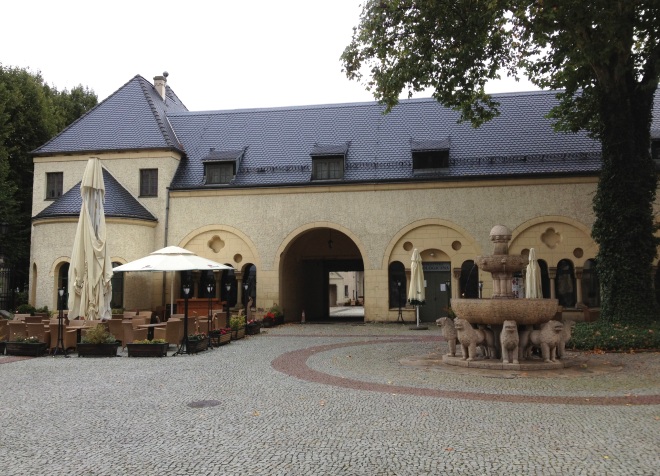 (They put us up in this building directly across the courtyard from the Castle.)

(Our accommodations. The door to the kitchen and bathroom are visible through the door.)

It was a very relaxing stay at Poznań Castle. And to give us an entire floor all to ourselves was certainly generous, but, admittedly, a bit spooky. Perhaps I never should have taken my dad up on his suggestion that we kids should join him in watching “The Canterville Ghost”, starring Charles Laughton, but I confess to listening just a bit to carefully for the sound of chains rattling across the stone floor, when I got up to use the loo during the night. 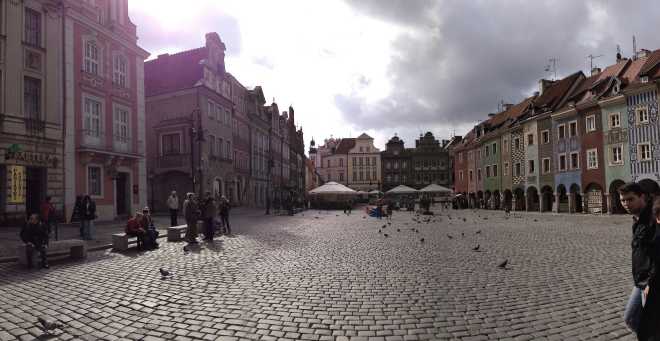 The day following our concert our host and promoter Jaroslaw took us out for a tour around Poznań, where he went to college. Poland has endured many tragedies, and its largest city of Poznań has seen its share. The tears of the persecuted and executed have seeped into the stones over the centuries.

But on that day we walked through the old cobblestone streets with our friend, this center of faith, music, education and humanity was shining with tears not of pain and suffering, but of love and mercy and hope.